Fabrizio Nastari (b. 1990) is an Italian composer whose aesthetic is based on the use of ironic devices. He is currently pursuing a PhD degree in Artistic Research at the Estonian Academy of Music and Theatre in Tallinn. 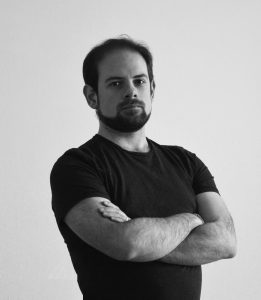 spectrum of techniques, to create contrast or to seek cohabitation for different musical textures, Fabrizio wants to reflect upon the absurdity of the time we live in and the complexity of the human being. Irony has a primary role as inspiration and as a rhetorical and compositional tool as well.

He is active as a researcher through the publishing of articles and presenting his works at international conferences as well.

Alongside Classical Guitar and Piano, he has studied Composition, Electroacoustic Composition and Choral Conducting at the Conservatorio “Ottorino Respighi”. Since 2017 he lives in Tallinn where he got his Master degree in Classical Composition studying with Toivo Tulev and Helena Tulve.

He took part in several masterclasses, seminars and workshops with many composers such as Helmut Lachenmann, Julia Wolfe, Stefano Gervasoni, Michael Finnissy, Rebecca Saunders, Ivan Fedele, Filippo Perocco, and others.

Since 2019 he works as a production assistant in the “highSCORE Festival”.